You are here: Home » » Current Issue » Diversity in our Colleges and Schools of Optometry

The following report is one of two reports in this edition of the journal that highlight what ASCO has achieved over the past 12 years in the areas of cultural competence and diversity. (Click here to read the other report, “The Path to Cultural Competence in Optometric Education and Practice: a Timeline to Multicultural Clinical Excellence.”)

The mission of the DCCC is:

The DCCC was formed as a task force in 2005 and became a standing committee in 2011 with a vision of achieving diversity and cultural competence in optometric education and patient care. The committee has made great strides, including the development of cultural competency curriculum guidelines in 2008. The charge of the CCCGS was to facilitate and encourage implementation of the curriculum guidelines at the schools and colleges of optometry. The subcommittee met its charge and was discontinued in June 2015.

ASCO wishes to acknowledge the many contributors to the DCCC and the CCCGS, as well as those who helped to lay crucial groundwork in the Association’s cultural competency and diversity efforts, all of whom have moved the needle forward in these important endeavors. Special thanks go to Edwin C. Marshall, OD, MS, MPH, FAAO, FNAP (Indiana University), who chaired the ASCO Diversity Task Force and the ASCO Cultural Competence Guidelines Work Group, Larry Davis, OD (UMSL), who chaired the DCCC over the past three years, and Barbara Fink, OD, MS, PhD (OSU), who chaired the CCCGS to implement training workshops at 18 schools and colleges of optometry.

As you read this report, it is important to keep in mind that achievement and maintenance of cultural competency and diversity are continuous journeys. As such, the report serves as a signpost as we continue on this road.

ASCO has recognized the need for diversity and cultural competency at its member schools and colleges of optometry. A task force to work towards these goals was formed in 2005. In 2011, the task force became a formal standing committee within the structure of ASCO. As a profession and an education community, we have made advances in the teaching of cultural and linguistic competence in our curricula. However, we have not formally reviewed the status of the diversity of the student body and faculty in our schools and colleges of optometry. Along with our colleagues all over the country, we recognize the importance of diversity. We realize it is a worthy goal to achieve, and that it begins with our student body. 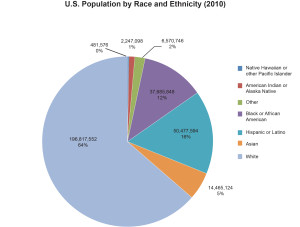 The Merriam-Webster dictionary defines diversity as the condition of having or being composed of differing elements.1 Over the course of history, the demographic composition of the United States has become increasingly more racially and ethnically diverse. According to the 2010 Census,2 the U.S. population was 308,745,538, 36% of which was comprised of various minority groups (Black or African American, Hispanic or Latino, Native Hawaiian or other Pacific Islander, American Indian or Alaska Native, Asian, and other) (Figure 1). In 2015, the minority population represented 40% of the total U.S. population. Our healthcare workforce and the optometric workforce currently do not reflect the changing racial and ethnic diversity of our country. According to the Bureau of Health Workforce of the Health Resources and Services Administration of the U.S. Department of Health and Human Services, the health professions workforce, on average, is predominantly White: 79.9% of all health professionals and 79.7% of the optometric workforce are White.3

There is clearly an imbalance in the racial and ethnic diversity represented within optometry as compared to the U.S. population. This type of mismatch contributes to differences in health status and access to care for many citizens.4 In 2003, the Institute of Medicine (IOM) warned of the “unequal treatment” minorities face when encountering the health system. Cultural differences and a lack of access to health care, combined with high rates of poverty and unemployment, contribute to substantial ethnic and racial disparities in health status and health outcomes.5 Access to eye care has not been spared from these trends. Children from impoverished and rural neighborhoods have very limited access to eye care after failing a vision screening, which disproportionately impacts children from poor households.6 Diabetic patients of color in underserved neighborhoods at federally qualified health centers (FQHCs) do not have adequate access to eye care because only 18% of FQHCs have on-site eye clinics.7

Many health professions, such as medicine, pharmacy, nursing and radiology, have created a call to action to increase diversity in their ranks.10-12 (See our recommended call to action for optometry below.) In order to diversify the optometry workforce, we must first examine and expand the racial and ethnic diversity of our student body and faculty.

Cultural and linguistic competence influences how optometrists deliver health care. The cultural challenges posed by a shifting patient demographic can be addressed by optometrists who are educated and trained in a culturally dynamic environment, which includes the student body as well as the patients served by each academic institution. Students from different backgrounds can learn from one another and, hence, have a positive impact on the care of the patient and in the perspectives of care delivery. Patients receiving care from providers of the same race/ethnic background have reported higher satisfaction.13

This report aims to review the data ASCO has compiled from its member schools over the past 10 years, which includes information about gender, race and ethnicity.14 The report examines trends, reviews current initiatives and recommends a call to action.

Data on optometry students and the United States population from 2006 to 2016 were obtained and analyzed as described herein.2,14 ASCO Student Data Reports are publicly available on the Association’s website. The reports aggregate data on enrolled students by male or female gender and ethnic identification as reported by each of 21 schools and colleges of optometry (Table 1).14 Ethnic identification is self-reported by students and is listed in seven categories: Black or African American, Hispanic or Latino, American Indian or Alaska Native, Asian, Native Hawaiian or other Pacific Islander, White, or Other. The gender and ethnic identification data from these reports were collated into spreadsheets by school and analyzed for trends over time. Additionally, the data were summed with descriptive statistics for all schools by year to analyze trends over time (Figures 2-4). 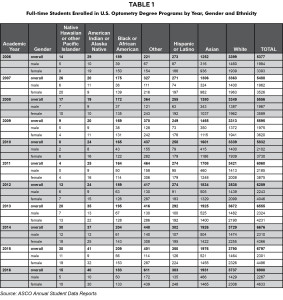 In Academic Year 2016, ASCO added the category of Two or More Races to its Student Data Report, which changed the way students self-identified. For consistency, this new category was included in the category of Other for the purposes of this report. The category of Other has not exhibited a consistent trend throughout the years, which may be due to different interpretations by individual students.

ASCO and its member institutions have embraced the concepts of diversity and multiculturalism in optometric education and in the profession. The Developing a Diverse Applicant Pool in Optometric Education Mini-Grant Program provided seed money for specific programs/projects that assisted schools and colleges of optometry with programs designed to implement educationally sound activities for recruiting and retaining under-represented minority (URM) students, financially disadvantaged students and first-generation college students. This 10-year project has opened doors for URM students but has made little impact on the overall diversity of the student body.

Optometry is not alone in recognizing the need for a diversified workforce. In addition to other health professions, business and the entertainment industry are demonstrating a growing appreciation for and commitment to diversity and inclusiveness. There are lessons to be learned from the success of these other industries. Fortune 500 companies have realized that diverse companies create more innovative products, happier customers and better financial returns.15 The Academy of Motion Picture Arts and Sciences (AMPAS) has felt the sting of not embracing diversity, not only from actors, directors, producers and the press, but more importantly from the consumers of movies. In January 2016, following two consecutive years of Oscar awards with no nominations of actors of color, the AMPAS Board of Governors unanimously made significant changes to increase diversity, which include recruitment of women and under-represented minorities to its membership and board.16 AMPAS initiatives were clearly a reaction to the outcry of the public, but the commitment to excellence through diversity was lauded.17

It is clear that a single strategy will not create meaningful change. Optometry needs to approach the problem from multiple fronts. While most professions do not start recruiting potential students until high school, ASCO should consider developing programs that introduce young minority students to optometry as early as middle school and continue throughout high school. This is an ideal opportunity for ASCO to partner with state and local optometric organizations to develop outreach programs that could be deployed in communities with large minority populations. The diversity mini-grants have yielded success in a number of schools and colleges of optometry, and consideration for a national program should be on the agenda.

Nursing includes several examples of pipeline strategies that have increased the number of minority students recruited out of high school who successfully complete nursing programs.18 Recruiting strategies that target undergraduate college students are also valuable. Unfortunately, studies indicate that female and minority students are less likely to consider a career in the science, technology, engineering or math (STEM) fields and are more likely to change majors in undergraduate school.19 Minority students often start STEM majors facing additional barriers when compared to their White peers. Some colleges and universities are developing programs to address these barriers with the hope of creating a larger pool of minority applicants for graduate and health professions programs.20 The best students are being recruited by multiple programs. Individual schools of optometry might consider the feasibility of early admission for promising undergraduate students.

The benefits of a racially and ethnically diversified student population are numerous and have been outlined in this report as well as landmark white papers from the Macy Foundation21 and the Sullivan Commission.4 Diversification is not a quota that needs to be filled, but an area of excellence that requires a commitment from each school and college of optometry. Leadership is needed not only from our schools, their Boards of Trustees, senior administration, faculty and staff, but also from the profession as a whole. The applicant pool is stagnant, and each school and college is competing for the same group of students. Addressing the diversity gap not only moves the profession forward, but helps to enrich the applicant pool. Nonetheless, this commitment needs to be a part of the culture and fabric of our institutions. In order for the profession of optometry to be diverse, change is required immediately. A diverse student body is the beginning of a diverse optometric workforce, which will also lead to diverse optometric leadership for the profession.

ASCO has made a commitment through the development of a cultural competency curriculum. Fourteen of its 23 member schools have participated in cultural competency curriculum implementation workshops. Many schools have explored pipeline programs through the ASCO diversity mini-grant program. However, these activities have produced only local change. They have not translated to significant change holistically, as documented in this paper. A high commitment needs to be embraced. Optometry’s diversity can no longer afford to be different than the diversity of the U.S. population. Diversity is a strength and asset to the profession. We can learn from other health professions (medicine, nursing, etc.), AMPAS and Fortune 500 companies. Excellence in diversity will lead to happier patients, doctors and staff. This will take time, as do all investment portfolios. When we start, compounding will take place, and, in a matter of time, we will reap the benefits of our actions.

To increase diversity and the numbers of URM students who graduate from the schools and colleges of optometry, action is required. We recommend the following call to action for ASCO and its member institutions.