You are here: Home » » Current Issue » Influence of Participation in an Elective Course in Enhancing Perceived Critical Thinking, Independent Learning and Residency Decision-Making

Purpose: This study evaluated the perceived effectiveness of the Special Populations Experience Course (SPEC) elective in enhancing critical thinking and independent learning skills and its influence on residency decision-making. Methods: 68 participants from graduating classes 2013-2016 who completed the SPEC elective were contacted by e-mail using an online survey developed by the authors. Results: 49 participants responded to the survey. Of the participants, 29 (59.2%) reported that the SPEC elective was very beneficial in cultivating independent learning and critical thinking skills; 27.6% reported that SPEC was the primary reason for pursuing a residency; and 55.2% cited other reasons for pursuing a residency. Conclusion: The majority of participants reported that the elective was beneficial in enhancing critical thinking and independent learning skills and also influenced their choice of specialty for residencies.

The Association of Schools and Colleges of Optometry defines optometrists as “independent primary health care professionals for the eye.”1 The scope of optometry has expanded over the past three decades. In an increasingly digital world with an aging population, optometrists should be prepared to adequately provide eye care to a wide variety of patients across all ages. Sound didactic knowledge and robust clinical experience are essential in training qualified doctors of optometry. Most schools of optometry offer direct patient care/clerkship experience in the second half of the second year or early in the third year of the degree program.2 Depending on the robustness and diversity of clinical sites, students gain exposure to general optometry and various optometric specialties (e.g., contact lenses, pediatrics, ocular disease, low vision). Even though early exposure to optometric specialties provides a better foundation for clinic readiness, didactic coursework in most specialty topics is often not offered until the third year of optometry school, and clinical exposure in these areas may not happen concurrently. Elective courses offer the opportunity for students to gain in-depth understanding of optometric specialties.

Elective courses designed to expand knowledge in optometric specialties are currently offered to third-year students in 12 optometry schools in the United States.3 At the New England College of Optometry (NECO), third-year students are required to complete 2.75 credit hours of elective courses in the third-year of optometry school. While most of the elective courses offer only a didactic component covering advanced topics in various optometric specialties, the Special Populations Experience Course (SPEC) at NECO offers weekly clinical patient care placements (4-8 hours per week) in specialty clinics (advanced contact lenses, pediatrics, vision therapy, low vision, and individuals with disabilities) in addition to didactic content.

Goals of the SPEC elective are:

Currently, the SPEC elective is offered during the summer, fall and spring terms of the third year. Enrollment in the elective is application-based, and because it contains additional didactic and clinical workload, students are required to be in good academic standing (cumulative grade point average minimum of 3.0). The application process includes a brief written statement outlining the student’s interest in a particular specialty and ranking of specialties (most to least desired). An accepted student is paired with a faculty mentor with clinical and didactic expertise in the student’s choice of specialty. The students work with the mentor in clinic weekly and participate in weekly discussions with the mentor to advance their training/knowledge in the field. In addition, students are assigned to eight hours per week of primary care clinic as part of their regular third-year assignment. The didactic component of the elective requires each student to do at least one case presentation and one journal article review and to write a case report. The final grade is pass/fail. Each mentor works with a student or two per term and is compensated separately on a term basis for the mentorship provided. Historically, 10-15% of the class population has enrolled in the elective in the third year.

A recent survey found that approximately 65% of all elective courses offered in other optometry schools cover topics in specialty patient care.3 However, it is unclear whether early exposure to optometric specialties prepares students for clinic readiness in fourth year or if it is beneficial in the residency decision-making process.

The purpose of this study was to evaluate the SPEC elective’s effectiveness in meeting its goals, specifically:

A web-based survey (Appendix A) was designed by the authors and sent through Google Forms to the students who completed the SPEC (classes 2013-2016) after the residency matching results were released for the class of 2016. The Institutional Review Board at NECO approved the study. Participants were given 10 days to complete the survey, the results of which were analyzed using Google Sheets and Microsoft Excel.

Perception of improvement in skills

Components of the elective that affected clinic readiness for fourth year

Many respondents reported that the clinical assignment, mentorship and case presentations were the most beneficial in helping them to become clinic ready for their fourth-year rotations. Activities such as journal clubs and topic paper writing were not perceived as beneficial in preparing for clinic readiness. However, a comparison of ranking across all components yielded no significant difference of rankings among SPEC components [χ2 (4) = 2.7265, p=0.6046]. (Figure 6)

At NECO, SPEC is the only elective that offers clinical patient care assignment in different optometric specialties to third-year optometry students in addition to a didactic component. The goal is to introduce clinical patient care in optometric specialties early during a student’s education through mentor pairing and weekly clinical assignments to facilitate informed residency decision-making. To our knowledge, this is the first study to evaluate the influence of an elective program in the optometric residency decision-making process. In addition, this study evaluated the perceived improvement in critical thinking and independent learning skills after participating in the elective.

Past studies have shown that good critical thinking skills are linked to good professional judgment.4,5,6 Denial4 showed that entering fourth-year optometry students who scored low on a critical thinking skills test demonstrated the lowest clinical ability. Independent learning is a lifelong necessity for optometrists. In addition, in the era of evidence-based medicine it is even more important for optometry students to learn the art of independent learning, which involves identifying reliable sources of information and seeking the most up-to-date information for providing quality patient care. In this study, more than half the respondents reported that the elective improved their critical thinking and independent learning skills compared with their primary care clinical assignment. This could be due to a combination of additional clinical assignment, participation in and preparation for case presentations and journal clubs (didactic elective activities) and one-on-one mentoring, which may not be required components of primary care regular clinical assignments for third-year students.

A desire to improve skills and develop confidence has been reported to be one of the important factors in deciding whether to pursue an optometric residency.7 Optometry students first hear about residency programs in their first year but decide to pursue residencies in their fourth year.8 It can be argued that early exposure to optometric specialties may benefit students’ residency decision-making process. A web-based cross-sectional survey evaluated the factors that influenced fourth-year medical students’ career choice in internal medicine and found that educational experience in internal medicine as a student was a significant factor in the choice compared with students whose career choice was not internal medicine.9 Another study showed that clinical experience during clerkships combined with “role-modeling effect” from clinical teaching faculty greatly influenced student specialty choices in medical schools for residency.10 In the current study, among respondents who applied for residency, 48.3% reported that SPEC influenced them to pursue residency training in the same specialty. It is important to note that clinical exposure in optometric specialties combined with mentorship is an important hallmark of this elective. However, only 27.6% of the respondents reported SPEC as the primary reason for deciding to apply for a residency. For a small group of respondents (10.3%), the elective influenced their decision not to continue with the specialty. This can be very useful when deciding to apply, given that 17.1% of optometry residency applicants begin searching for programs at least one year before the start of residency programs, in their third year.11

There are limitations to this study. We are reporting the perceived (subjective) improvement in participant skills. Conducting an assessment of skills prior to and after completion of the elective to objectively assess the impact of participation would have been helpful. Furthermore, because the elective is fairly new (class of 2013), the sample size was small. Nevertheless, the results of the study enabled an understanding of how SPEC benefitted the participants with regard to difficult choices such as residency decision-making.

The SPEC elective experience benefitted participants in deciding choice of residency in their third-year of optometry school. In addition, the SPEC elective was perceived by third-year optometry students to be effective in improving independent and critical thinking skills compared with the primary care assignment. Additional research is needed to assess what factors/experience influence the choice of optometric residency, which in turn could help optometric educators develop creative learning experiences. 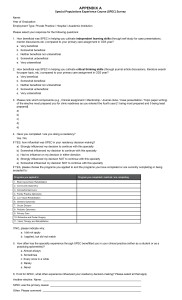 Dr. Srinivasan [srinivasang@neco.edu] is an Associate Professor at New England College of Optometry in the Department of Specialty and Advanced Care. She is the Instructor of Record for the Binocular Accommodative Anomalies Course and the Special Populations Experience Course and is the Attending Pediatric Optometrist at the New England Eye Roslindale and Codman Square health centers.

Dr. Russo is an Assistant Professor in the Department of Primary Care at New England College of Optometry where she teaches in the following courses: Principles and Practice of Optometry I, II, III, Ocular Disease Principles II, Advanced Diagnostic Techniques I and II, Clinical Reasoning II, and Vision Health Care.

Dr. Lyons is a Professor at New England College of Optometry and Chair of the Specialty and Advanced Care Department. She is a member of the expert panel for the National Center for Children’s Vision and Eye Health and is Director of Framingham Public School Vision Center.

A Digital Means to an Analog End?