This study highlights the limitations of self-reported data and sheds light on irregular sleep patterns and their effect on academic performance. Self-reported sleep habits were assessed using a pre-study questionnaire. Sleep patterns were monitored for up to 30 days with wrist-based accelerometers. Academic performance was assessed using students’ self-reported grade point average (GPA). Twenty-one professional school students reported a mean sleep duration of 7h32m, with a mean time to bed of 23:14 and mean wake time of 07:32. Time-to-bed consistency, sleep-duration consistency and earlier time to bed during the weekdays were highly correlated with better GPA.

Insufficient sleep has been labeled a public health crisis in the United States, with many adults receiving less than the 7-8 hours of sleep per night recommended by the Centers for Disease Control and Prevention.1 Other national initiatives such as Healthy People 2020 and Healthy People 2030 from the U.S. Department of Health and Human Services include sleep health objectives that address this crisis. Busier schedules and lifestyle factors have led many to treat sleep as a commodity to be exchanged for greater productivity. Sacrificing sleep for study time is a prevalent practice in medical, optometric and other health science student populations.2 Sleep has a relevant role in learning and academic achievement, and the literature investigating the relationship between student sleep and student learning covers many areas.3

Irregular patterns in sleep onset, wake time and sleep duration can result in poor quality of sleep,4 which has been linked to cognitive impairment,5-7 delayed reaction times and increased risk for health issues.8-10 All of these can be detrimental for optometry students. The financial implications of insufficient sleep have also been well-documented in decreased productivity, treatment of sleeping disorders and premature or accidental death.11-14 Optometry students may be aware of some of these risks, but with their focus on learning to navigate the rigors of the curriculum, few are cognizant of their sleep hygiene and how it may affect their learning and ultimately academic achievement. Studies focused on sleep duration and sleep/wake indices have closely linked student learning capacity and academic performance with sleep quality.15

Often referred to as the knowledge-behavior gap, the wealth of information on good sleep hygiene and physical/mental health is not reflected in personal sleep habits, with more than a third of all Americans reportedly not getting enough sleep.16 Poor quality sleep among college students has been reported as high as 60% and has been associated with increased mental health issues and irregular sleep patterns16-19 that lead to increased daytime fatigue, inattentiveness and poor academic performance.20

To date, much of the research regarding student sleep habits has been unable to address issues such as inherent optimistic bias, which can lead people to think more positively about their habits and result in poor decision-making.21 Prior sleep studies have also required expensive equipment, relied heavily on sleep journals/self-reported sleep habits, or were limited in days monitored.22,23 The aims of this study are to integrate self-reported sleep habits with objectively recorded wrist-based accelerometer (WBA) data and relate subjects’ sleep profiles with academic performance. Using technology, we look to minimize personal bias, broaden the view of subject sleep behavior, and improve data analysis of variations in bedtimes, wake times and sleep duration to develop individualized sleep profiles.

This longitudinal study was conducted during the Spring/Summer semesters at the University of the Incarnate Word Rosenberg School of Optometry. Twenty-three full-time (greater than 16 credit hours) graduate students were recruited to participate in a pre-study questionnaire and wear a WBA for 30 days (21-day minimum). Two subjects did not complete the study for personal reasons. Exclusion criteria included pregnancy, nursing or caring for a newborn.

All subjects provided written informed consent. This study was approved by the Institutional Review Board and was in compliance with the Declaration of Helsinki.

Two sets of data were collected: self-reported sleep behaviors and passively recorded sleep patterns. All subject data were de-identified, and unique identification numbers were used to track each participant. Data were stored on password-protected cloud systems.

Participants were given the option to use a personal WBA or the study-provided tracker (Mi Band 2). The three WBAs used for sleep data analysis were: Fitbit Charge 2 (San Francisco, CA), AutoSleep application (Sydney, AU) with Apple Watch Series 3 (Cupertino, CA), and Xiaomi Mi Band 2 (Taipei, TW). Although their sleep algorithms are proprietary, all three trackers utilize movement and heart rate to define time to bed, sleep duration and wake time for all subjects.24-27 Subjects were asked to wear the WBA throughout the day and night for the duration of the study. 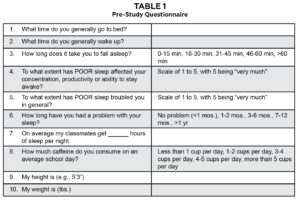 All subjects were given a sleep study questionnaire designed to collect information regarding demographics, sleep habits, caffeine consumption, body mass index and perceived amount of sleep their classmates receive (Table 1).

Duration vs. time to bed vs. wake time

Total sleep duration did not influence academic performance as we predicted and previous literature has stated; however, sleep onset correlated more closely to academic performance.15, 18-20 It was only when we looked at the variations in sleep duration patterns, specifically during the weekdays, that a moderate correlation between duration and GPA emerged. Similar to the findings from the BaHammam et al. 2012 study, an earlier bedtime and a longer duration during the weekdays showed a clear association with academic performance.28 The importance of time to bed on sleep duration is a direct result of the restriction on WKD wake times. Of the two variables, “what time to go to bed” and “what time to wake up,” students increase their likelihood of receiving more sleep with earlier bedtimes. Wake times were less predictive of academic performance based on external factors (e.g., academic schedule), which were out of the students’ control.

Our data support the impact sleep consistency has on a student’s ability to perform academically. The less variable/more regular the sleep duration and time to bed values were, the better the GPA. Regular sleep and circadian rhythms have been linked with learning and memory-forming.10 This study was able to utilize data collected over 30 days to identify individual sleep profiles not usually seen in self-reported sleep studies. WBAs allowed for more accurate and consistent passive recording of data rather than reliance on subjective self-reported time to bed and wake times.

A noticeable shift in sleep patterns was observed among our cohort when comparing WKD and WKE datasets. Students went to bed 19 minutes later, rose 1 hour and 9 minutes later and received, on average, 38 more minutes of total WKE sleep, which could be a response to chronic sleep insufficiency during the week. Prior studies of sleep-wake cycle shifts related to daylight savings time have found evidence of decreased productivity, increased traffic accidents and absenteeism.29 Our data suggest regular sleep patterns during the weekdays are more related to academic performance compared with significantly different weekend sleep patterns.20

To avoid bias regarding sleep duration and the often cited 8-hour recommendation, our pre-study questionnaire instead asked subjects to provide their typical time to bed and wake times. We calculated the difference to determine their estimated average sleep duration, which turned out to be accurate within 8 minutes of the overall measured sleep duration. What we found most interesting was how estimated time in bed and wake times were skewed earlier (23:14 vs. 00:06 and 06:46 vs. 07:45, respectively) when compared to WBA data. We feel the ability to collect data regarding sleep patterns with no explicit action from the user minimized subject bias and should be considered in future sleep studies.

Potential limitations in our study included our sample population and size. Surveying students across three different grade levels can affect the weight of the GPA (e.g., an OPTIII GPA includes more than 60 credit hours, while an OPTI may only include 22). Due to the timing of this research, there was also a greater distribution of third-year year students (n=12) participating compared with the numbers of second-year and fourth-year students (n=3 and n=6, respectively). Also, as a pilot study, a small sample size was used, which may have resulted in lower statistical power. Follow-up studies will be limited to a single class to address these factors. Additionally, using three different activity trackers with potentially varying algorithms could have affected time to bed and wake time measurements. Future studies will utilize a uniform tracker for all subjects. The trackers were also unable to account for naps, which students often use to recharge after building sleep debt from the previous day. This software limitation may impact which tracker we elect to use moving forward.

This study was funded by an internal faculty development grant at the University of the Incarnate Word Rosenberg School of Optometry.
The authors would like to thank Dr. Jeff Rabin for his support of this study.

Dr. Valdes [mvaldes@uiwtx.edu] is an Assistant Professor at the University of the Incarnate Word Rosenberg School of Optometry. He is a Diplomate in the Low Vision Section of the American Academy of Optometry.

Dr. Rios is Director of Optometric and Clinical Library Services at the University of the Incarnate Word Rosenberg School of Optometry.

Ms. Rocha is a fourth-year student at the University of the Incarnate Word Rosenberg School of Optometry.

Ms. Rodriquez is a fourth-year student at the University of the Incarnate Word Rosenberg School of Optometry.

Call for Papers for Theme Edition: Diversity and Cultural Competence in Optometry