Students in the United States generally have experienced limited duration examinations several times before entering an optometric degree program (e.g., SATs, ACTs, OATs and in undergraduate course work). For optometric education didactic courses, typical practice is for students to be given tests of knowledge that are of limited duration (e.g., 60 minutes). Although students may apply for extended time for examinations if they have a qualifying condition, most students must complete their didactic course tests during the allotted time. Personal observation (in three different optometric courses) is that, for an allotted examination time of one hour, some students will complete the examination in approximately 15 minutes, many complete the exam within 45 minutes, and a handful of students remain for the entire test period. Whether the time they spend on the test (self-regulated test duration) is related to their test performance is unknown.

In a paper presented at the Association for Institutional Research Annual Forum, Chicago, IL, June 2010, Hosch examined time on test, student motivation and performance on the Collegiate Learning Assessment (CLA), which Hosch states is a “low stakes” examination.1 The CLA is a timed essay test used to assess student learning at the undergraduate level. Hosch found a strong relationship between time students spent on taking the test and test performance (p<.001). In a different study involving students in an undergraduate statistics course, Landrum et al. found that the students’ self-reported test completion time was sometimes, but not consistently, negatively correlated with test performance.2 A literature review did not find any studies that examined time taking the test and test performance in graduate health professional programs or on tests with only multiple-choice items.

With digitally administered tests, information about how much time each student spends taking the test can be objectively obtained. Given the paucity of published research on the relationship between a student’s self-regulated test duration and test performance, reporting any identified relationship between these variables is of interest to both educators and students because the knowledge may help improve test performance.

We aimed to examine the relationship between self-regulated test duration on a test of known time limit and test performance on multiple-choice examinations in a required basic science class for first-year students in an optometric program.

After affirmation by the Institutional Review Board of Southern College of Optometry (SCO) that the protocol met the requirements for review exemption, a retrospective review of already-existing data was performed. The multiple-choice test scores for two midterm examinations (MT1 and MT2) and a final examination for the first-year course “Visual Sensation and Perception” and the time spent taking each test were obtained for the first-year students at SCO in spring 2019. All tests were digitally administered via ExamSoft (ExamSoft Worldwide LLC, Dallas, TX). All tests had been administrated in the same large lecture hall with consistent environmental conditions. Students had an allotted test duration of 60 minutes each for MT1 and MT2 (both administered from 11 a.m. to noon) and 120 minutes for the final examination (administered from 12:30 p.m. to 2:30 p.m.). The software automatically uploaded the responses of any student who had not self-uploaded their responses prior to the expiration of the test’s time limit. MT1 and MT2 each included 40 items; the not directly cumulative final examination included 60 items. Each test was worth 20% of the total course grade. A member of the Information Technology staff at SCO (second author) provided the instructor of record for the course (first author) with each student’s test scores for the three tests (percent correct) and the total test time (in minutes) between the password input by the student to begin the test and the completed upload of the student’s examination responses.

SPSS v.26.0 (IBM) was used for statistical analysis. The Shapiro-Wilk test was used to test the shape of the data distributions to determine the appropriate tests for evaluating the relationships between self-regulated test duration and test score. Related samples Wilcoxon signed rank test, related samples Friedman’s two-way analysis of variance (ANOVA) by ranks, Mann-Whitney U test, and independent samples t-test were used, as appropriate for data distribution, for data comparisons. All reported P values are two-tailed.

Figure 1(a) and Table 1 (column 2) show the distributions of the self-regulated test durations for each of the tests. The related samples Wilcoxon signed rank test indicated that the median of the differences in the time spent on MT1 compared to the time spent on MT2 was significantly different from zero (standardized test statistic=-4.22, P<.001). The mean times spent on MT1 and on MT2, respectively, were 42.0±11.0 and 39.1±11.5 minutes. The proportions of the allotted time spent on each test that the means represent were, for MT1, MT2 and the final examination respectively, 0.7, 0.65 and 0.43.

Table 2. Only the proportion of students scoring above 83 on midterm 1 (MT1) differed between the two groups defined by the time allotted for the test (Chi-square=5.70, P=.017) Click to enlarge 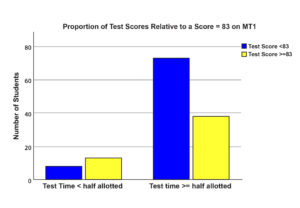 The main finding of this study was that when the amount of time spent taking a multiple-choice test in a basic science course in the optometric program was less than half the allotted time for the test, this group of first-year optometry students demonstrated a mean test score that was significantly higher for MT1, significantly lower for the final examination, and not significantly different for MT2, compared to the scores of their classmates who spent more than half the allotted test time completing the test. Additionally, no linear relationship was found between self-regulated test durations and test score for any of the three tests. Finally, the proportion of students achieving a test score of 83 or above (equivalent to a letter grade better than B-) was significantly different between those spending more vs. less than half the allotted test time completing the exam only for MT1.

Several reasons may explain the lack of consistency across these results. First, students in an optometric program are not only well-versed in multiple-choice test-taking strategies prior to matriculation, but have demonstrated proficiency in examinations as ascertained through their optometry school applications. Although the material may be new to them, they likely rely on strategies that have brought them success (for example, a pre-determined number of times that the student will review the entire test). Second, the material covered by the first two tests differed in nature, though the amount of material covered by MT1 and MT2 was about the same; students may have found the material on the second examination more difficult to understand. Third, for the first test given by an instructor, students have the additional unknown of the instructor’s question-writing style; hence, students may have put more effort into studying for MT1 compared to MT2 and the final examination.

Another factor that may explain the better performance on MT1 compared to the other two tests is that the students had no knowledge of how well they were doing in any of their classes at the time of the first midterm. If they had performed less than desired in other courses, they may have put in less effort on MT2 and the final for this course. Finally, the students had four midterm examinations scheduled for other courses in the two days following MT1 and MT2, but the final examination was the last of seven examinations in that week; therefore, fatigue may have contributed to the lower scores for the final examination despite the proportionately larger amount of time allotted for the examination.

Although the subjects were first-year students, they had exposure to the software for test administration for all of their first-semester courses; the data collection for this study took place during the second semester. Thus, although the students were relative novices with the software, unfamiliarity with the software likely did not contribute significantly to self-regulated test duration.

The way in which test time was calculated for this study also may have contributed to inconsistent results across the tests. We used the “total time” that each student had access to the examination questions. This value was unable to reflect how much time the students actually spent with their attention on the test. Other metrics may better reflect test scores, such as the number of times that the student viewed each question, the number of times the student viewed the more difficult questions, the number of times the student changed the answer for each question, whether or not certain features of the software were used by the student (highlighting, etc.). Further investigation into whether these indices are related to test scores may provide useful information for improving student performance.

Non-test factors may also have differed across testing days and created inconsistencies in the results, such as alertness, caffeine consumption, non-academic stressors, food consumption, medications, health on test day, etc.3-5 Additionally, for those who performed less than desired on MT1, test anxiety may have contributed to worse performance on the following tests. Finally, weaker language skills have been associated with longer completion times for multiple-choice exams;6 we did not use any metric of language skills to evaluate the influence of this factor.

Self-regulated test duration on a time-limited test as measured with digital test administration software did not show a consistent relationship with test performance on multiple-choice tests over the course of a semester in a basic science course in the first-year optometric program at SCO. Whether a more consistent relationship between self-regulated test duration and test performance would manifest when controlled for other academic and non-academic factors remains to be explored. Additionally, an analysis of self-regulated test duration and test performance in other first-year courses and in second- and third- optometric-year course work for this same class of students may provide insight into the development of test-taking strategies that may benefit new optometric program students. Further exploration of other test-taking strategy information obtained by test administration software is warranted.

We wish to thank Southern College of Optometry for permitting access to the test duration information.

Dr. Cisarik [pcisarik@sco.edu] has been on the faculty at Southern College of Optometry since 2008. In addition to clinical teaching, she is Instructor of Record for Visual Sensation and Perception, Introduction to Binocular Vision, and Neuro Eye Disease

Ms. Powers has a Master of Education in Learning Systems Technology. She has been the Systems Administrator for Learning Management at Southern College of Optometry for two years and has worked in higher education for more than 15 years.

Call for Papers for Theme Edition: Diversity and Cultural Competence in Optometry